The double screened boards are used to stack two different colonies into a single hive.

Usually, a strong colony is set at the bottom, then you install the double screen (so the bees from different colonies cannot kill each other), and you place the weaker hive on top. The two colonies will share the smells and get used to eachother and the stronger colony at the bottom will provide some heat to the weaker colony at the top (during winter).

Among other uses, this tool can also be used to requeen a colony. Place the double screen board between the old and new hive and the old bees will make their way back to the old hive, leaving young bees with the new queen. You can direct the bees through different access points that you can open and close.

Compatible with 10 Frame equipment only.

There are no reviews yet.

Be the first to review “Double Screen Board 10F” Cancel reply 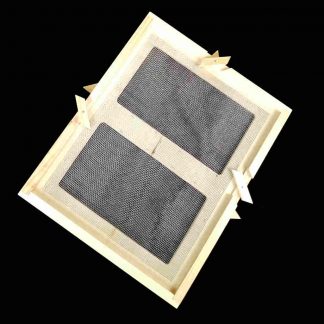